Advocates be cautious: – Litigate your case in the press or on the internet at your own risk 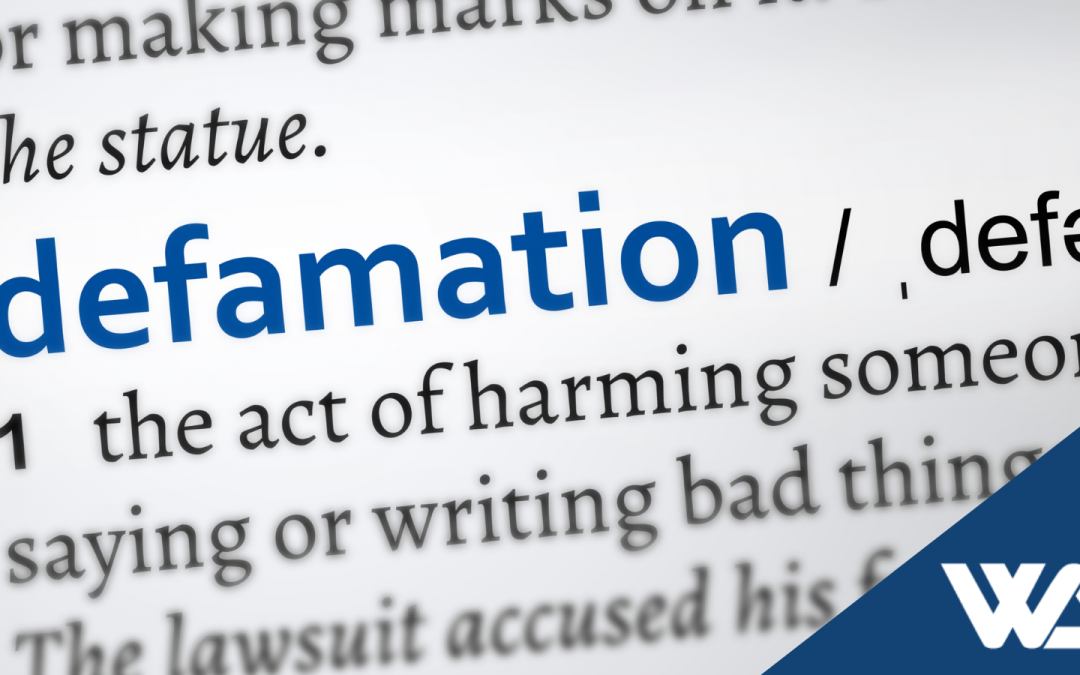 Van Vechten Veeder, a United States Judge stated: “one’s good name is as truly the product of one’s efforts as any physical possession; indeed, it alone gives to material possessions their value.” It therefore follows that a person’s name or reputation ought to be protected at all costs. This need of protecting an individual’s reputation before the eyes of right-minded people in society gave rise to the tort of Defamation. The topic on defamation is a broad one however, this article will analyse whether the publishing of judicial pleadings to the press and on the internet can leave Advocates exposed to defamation suits.

Defamation also known as character assassination is a tort (civil wrong) that dates back to the 13th century arising from the age-old premise that states ‘no derogatory remark should ever be made about a gentleman’. The common law tort of defamation comes from the recognition that: “reputation and honour are no less precious to good men than bodily safety and freedom. In some cases, they are dearer than life itself. It is needful for the peace and welfare of a civilized commonwealth that the laws should protect the reputation as well as the person of the citizen”

Defamation is used to protect the character of individuals, corporations and public institutions from attacks while at the same time promoting freedom of thought, right to public discussion and liberty. The Kenyan Court of Appeal in the case of Selina Patani & another v Dhiranji vs. Patani [2019] eKLR stated thus:

Defamation can be classified into two: libel and slander. Libel is defamatory content that is written whereas slander entails defamation that is oral. Before delving into the intricacies of defamation with regards to publication of court documents it is prudent to ask what are the elements necessary for one to prove defamation? The Halsbury’s laws of England 4th Ed. Vol 28 paragraph 10 read together with the case of John Ward vs. Standard Ltd, HCCC 1062 of 2005 and the case of Selina Patani & another v Dhiranji vs. Patani [2019] eKLR summarized the ingredients as follows:

Numerous questions arise when it comes to defamation through publication of court pleadings and complaints. Amongst them are whether litigating in public, which is a common occurrence nowadays, can lead to defamation liability? To rephrase that question, what will be the consequences of publication of ongoing Court disputes to the news media and or the internet by an Advocate?

Publication with regards to defamation was defined by an English Court of Appeal in the case of Pullman vs. Walter Hill & Co (1891) 1 QB 524. The Court held that publication is basically the making known of defamatory content to a third party. Following this definition, Advocates who choose to provide details of ongoing cases by giving judicial pleadings to news media may find themselves liable to defamation claims.

Besides truth, there maybe they be other defences to an action for defamation. Absolute and qualifies privileges are affirmative defences to defamation that set forth interests which society recognizes as superior to that of one’s own reputation. However, the application of these interests must be narrowly tailored to serve the purpose for which they were created. If the privilege no longer serves the purpose for which it was created, it is waived. When pleadings are drafted as part of a judicial proceeding, any defamatory language within the pleadings is protected by the absolute judicial privilege, otherwise known as the absolute litigation privilege. The publishing of these pleadings to parties and on forums unconnected with the judicial proceeding typically extinguished the absolute litigation privilege. However, the publishing of filed pleadings by non-litigant parties under certain conditions may still enjoy protection under the more limited, qualified fair report privilege.

Thus, absolute litigation privilege protects judges, lawyers, witnesses and parties from the threat of defamation suits as long as the communication was made in the course of judicial proceeding and was relevant to a matter at issue. The privilege serves the purpose of allowing the free flow of information between persons involved in a judicial proceeding.

However, as noted earlier, it’s worth noting that absolute and qualified privilege will be extinguished when an Advocate publishes a complaint to the press of the internet. Various US Courts such as the Eighth Circuit Court of Appeals in the case of Asay vs. Hallmark Cards have refused to extend absolute privilege to the publishing of a complaint to the press by an Advocate. The Court held as follows;

“[W]hile a defamatory pleading is privileged, that pleading cannot be a predicate for dissemination of the defamatory matter to the public or third parties not connected with the judicial proceeding. Otherwise, to cause great harm and mischief a person need only file false and defamatory statements as judicial pleadings and then proceed to republish the defamation at will under the cloak of immunity”

Further, in Bradley vs. Hartfors Acc.& Indem. Co, the California Court of Appeals addressed the issue of a Plaintiff who apparently brought a fabricated lawsuit for the sole purpose of invoking a privilege to publish the underlying pleading to the press. The Court found that filing a judicial pleading did not provide a “full scale, blanket authorization to republish the pleadings on a non-privilege occasion to persons who the privilege is not applicable.” The Court was emphatic and noted:

“It is easily discernible what result would ensue should we condone such an apparent ruse by providing absolute litigation immunity to the resourceful slanderer. The privileged defamation, now barely a tolerated exception, would gain full-fledged legitimatization. All that the slanderer would have to do to avoid the consequences of his evil act would be to file the defamatory matter with the Court first, then republish it’s as an absolutely privileged matter to the news media or to the public at large, thereby converting the litigation in the court into litigation in the press or in the street.”

It should be noted that Advocates who wishes to litigate their case in the press or in the internet as part of the zealous advocacy of their Clients will not be able to use the absolute litigation privilege as a shield against potential defamation suits. While they may choose this tactic, they do so at their own risk. This was addressed by Federal District Court for New York in C.A.T. Scan Associates vs. Ohio-Nuclear Inc., wherein the Court averred as follows:

Following the cases given above it is abundantly clear that if an advocate purposefully and maliciously stimulates press coverage so as to gain publicity of a complaint then the same Advocate cannot rely on the defense of privilege. In simple terms the Courts have said; litigate in public at your own risk. The Courts have further held that while a filed complaint is a public document there is need to protect against litigants affecting public opinion without facing the repercussions for potentially influential and untrue utterances.

In determining if such Court information is absolutely privileged the Supreme Court of Pennsylvania in the case of Bochetto vs. Gibson used a two-prong test. The test inquired whether the republication of the pleadings “1) was issued during the regular course of the judicial proceedings, and 2) [if] it was pertinent and material to those proceedings. In that case, the Court held that although a complaint is initially privileged, if the same is over published or republished to another audience outside the proceeding then the same will extinguish the privilege.

Conditional privilege also known as qualified privilege will also be waived depending on the circumstances. Conditional privilege arises when particular defamatory remarks are advance social policies for the greater good. It arises where the maker has a social and legal duty to make such remarks. The High Court of Kenya in the case of Joseph Njogu Kamunge vs. Charles Muriuki Gachari [2016] eKLR held as follows;

However, it is worth noting that there has to be absence of any abuse of the privilege. In determining whether there was abuse the Courts will look at the following;

The Court of Appeal of Kenya in the case of Ndung’u Njoroge & Kwach Advocates & another vs. Standard Limited & 8 Others [2018] eKLR held that publication of a matter of public interest to the general public is protected by qualified privilege unless it is shown that the publication was irresponsible.

In addition, Section 7 of the Defamation Act recognizes the defence of qualified privilege, which is available where publication is made without malice.

In conclusion, it is prudent to note that the internet and the press may be very useful in litigating a matter as it may sway the court of public opinion. However, take note that there is extreme exposure for defamation suits should an Advocate decide to take that route. That exposure will also extend to not only the Advocate in his personal capacity but also to the entire law firm. In addition, under the doctrine of respondeat superior an Advocate and or employer can be liable for defamatory conduct of his employees if the same were made in the scope of their employment.

Law firms ought not to engage the press or the internet as part of their litigation strategy. Where law firms submit the filed pleadings to the press or simply upload them to their website, if they pleadings contain defamatory statements, this action will extinguish the absolute litigation privilege and are outside the purview of any conditional privilege. Law firms should sensitize its Members on the potentially devastating effects of publishing pleadings outside the confines of judicial proceeding. Firms are also well advised to develop policies for addressing issues when they are requested to comment on pending litigation that it has filed. While the internet and press are still potentially very useful litigation tools, all Advocates should be well aware of the pitfalls and risks associated with their use.