A Commentary on the Basil Criticos V National Bank Judgment: Damages for Wrongful Sale of a Security. 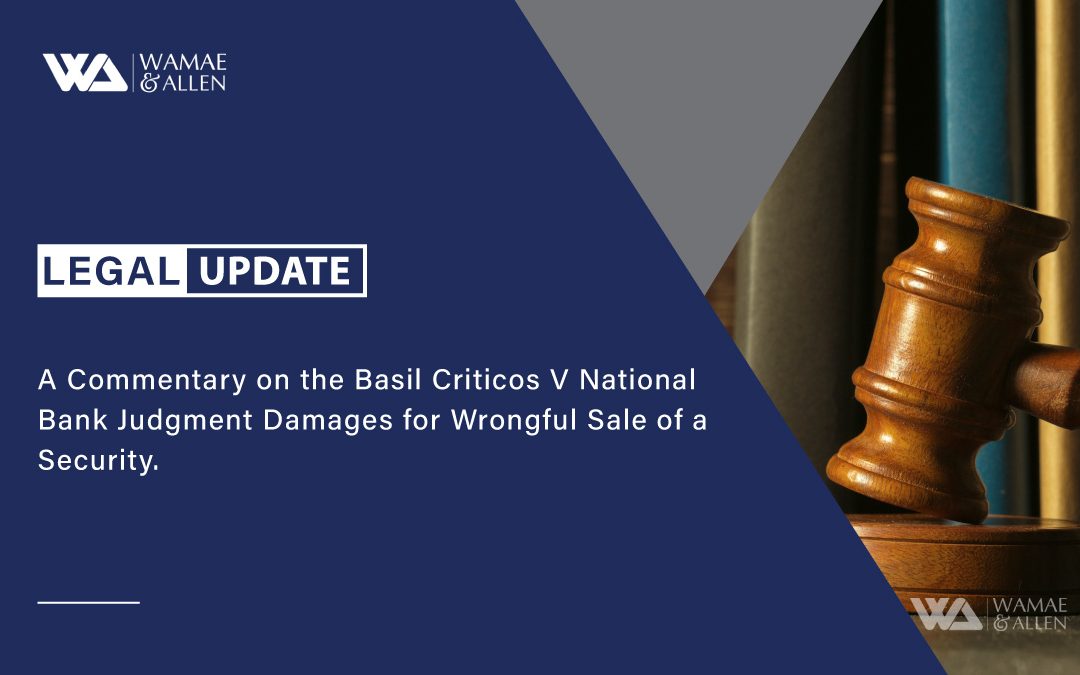 “He may not have been a model guarantor but, like Shakespeare’s King Lear, he definitely was a man more sinned against than sinning. And he was entitled to the aid of the law.” – Extract from judgment in Nairobi Civil Appeal No. 80 of 2017 Basil Criticos vs. National Bank of Kenya Ltd & Another delivered on 28th April 2022.

The appeal was about a bank that trampled on the rights of a guarantor whose land was sold at a gross undervalue in contempt of injunctive orders that were in place. The bank acted in bad faith and refused to accept the Appellant’s offer of Kshs. 63 million to redeem the charged property and instead sold the land for Kshs. 55 million. Strangely, it later sued the Appellant under his guarantee for Kshs. 20 million without refunding the surplus of Kshs. 35 million which was an express admission that his liability was limited to Kshs. 20 million.
The Appellant’s land had 7,000 acres of sisal, buildings and various crops on 15,994.5 acres and was sold for a paltry Kshs. 3,439 per acre.

It is not in dispute that Basil Criticos was a guarantor for the sum of Kshs. 20 million. When the borrower defaulted, the bank called up the guarantee and imposed interest that was compounded at 35% per month which amounted to 420% per annum. At one time the bank had in 2006 found a purchaser for 300 acres of the charged property offering Kshs. 28,500,000.
In an unfortunate twist of events, the bank reneged on an earlier agreement to subdivide part of the land to settle the debt and instead ignored injunctive orders obtained by some of the purchasers, who with the consent of the bank purchased various plots and paid deposits to the bank, sold the entire land (inclusive of the sub-divisions) for Kshs. 55 million.
In one of the fastest conveyancing transactions in history, the sale agreement between the bank and the purchaser was executed in the morning and the property transferred to the purchaser in the afternoon without payment of a single cent. The full purchase price was paid six months later in defiance of injunctive orders that barred the bank from accepting the purchase price.
The case was party heard by three different judges in the high court. After two judges were transferred, the last judge who came at the tail end of the trial dismissed the suit and failed to justly determine the real issues in controversy and ignored the evidence and the law on the liability of a guarantor and the right to redeem charged property.
One important factor is that the bank never produced any counter valuation report to rebut the concise valuation report submitted by the guarantor’s expert valuer and instead relied on a biased valuation report by a government valuer which was relied upon at the time of the unlawful sale. It is also important to point out that the bank’s own valuation reports done years before the sale gave a much higher value for the property.

In conclusion, the Court found that the bank had treated Basil Criticos in a shabby and wholly unacceptable if not tyrannous manner in the entire transaction when it charged manifestly excessive interest rates, declined his offers to redeem the debt, proceeded to sell the property at less than the amount offered and at a gross under sale in plain breach of the bank’s duty to act with care and in good faith.

This decision is a reminder that:

This article is provided free of charge for information purposes only; it does not constitute legal advice and should be relied on as such. No responsibility for the accuracy and/or correctness of the information and commentary as set in the article should be held without seeking specific legal advice on the subject matter. If you have any query regarding the same, please do not hesitate to contact Litigation vide litigation@wamaeallen.com

See also the article: In duplum law must be expanded to cover all borrowers